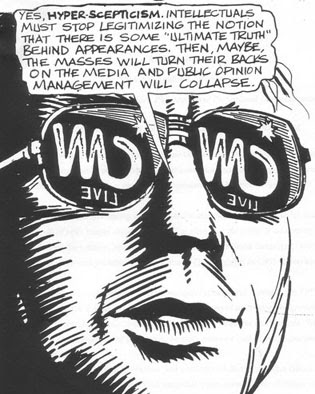 Here is a quote from Baudrillard that Prof Paul Taylor chose for the Radio 3 programme to be broadcast tonite at 10pm (I am talking about pseudo-profundity and bullshit and pointing a finger at some post-modern thinkers):

For ethnology to live, its object must die. But the latter revenges itself by dying for having been “discovered”, and defies by its death the science that wants to take hold of it. Doesn’t every science live on this paradoxical slope to which it is doomed by the evanescence of its object in the very process of its apprehension, and by the pitiless reversal this dead object exerts on it? Like Orpheus it always turns around too soon, and its object, like Eurydice, falls back into Hades … the logical evolution of a science is to distance itself ever further from its object until it dispenses with it entirely: its autonomy evermore fantastical in reaching its pure form.

Paul thought this quote encapsulated some deep insight about science (which he illustrated with an example of an actual remote tribe, the Tasaday indians, who had to retreat further into the forest in order to remain an uncontacted tribe, whom people nevertheless then tried to photograph from a plane [Paul has a paper on this here]).

My view is: this quotation appears as it stands to be a combination of a banal observation and a ludicrous falsehood, puffed up into an impressive linguistic souffle and pretentiously topped off with a reference to Greek mythology.

Well, it is true that ethnology, the study of cultures, can sometimes end up destroying (or at the very least changing) the cultures it studies, if e.g. the culture of a remote rainforest tribe.

But this simple point that science sometimes destroys what it studies, by studying it, is not new. William Wordsworth, back in 1798, said:

Yes, we do sometimes murder to dissect. I might kill an individual insect in order to study its anatomy.

That we sometimes destroy what we study (in the process of studying it) is true, but it’s a rather banal, humdrum point that, as I say, Wordsworth made well over a hundred years before Baudrillard. It’s an uncontroversial observation with which we can and no doubt will all agree.

But of course this is not to say that to investigate something scientifically always involves destroying what’s being investigated. That’s obviously false. Indeed it’s a ludicrous suggestion. Someone who studies galaxies does not thereby destroy them. Nor, by dissecting an insect, do I destroy the species knowledge of which I acquire by my dissection.

Yet Baudrillard goes on to suggests every science does ultimately do precisely that – it cuts itself off from and destroys its own subject matter.

However, such is the high falutin, flowery way in which Baudrillard makes the slide from banal observation to ludicrous falsehood that many of us will fail to spot his sleight of hand – that a banality has indeed been replaced by a falsehood. We’ll be too distracted by the seductive analogy drawn the with Eurypides to spot the conjurer’s switcheroo.

By the time we reach the end of the Baudrillard quotation, he’s combining words so cryptically it’s hard to know what he is talking about. Science’s “autonomy evermore fantastical in reaching its pure form” Eh? Try translating that back into plain English.

But by this stage it doesn’t matter that Baudrillard is drifting into gibberish. In fact it’s very much to his advantage. For, once Baudrillard has got you to come as far as accepting the obviously false but nevertheless terrifically exciting skeptical conclusion: “Oh Wow! Yes science does always destroy, cuts itself off from, what it seeks to know, doesn’t it?” you are likely to think there must be some still deeper insight contained within his parting gibberish (only of course it’s really, really deep and that’s why Baudrillard needs to resort to such convoluted and baffling prose to try to articulate it).

At this point, it’s job done for Baudrillard. He can sit back, adopt a sage like expression, and let you do start doing intellectual labour for him.

Of course there may be great insight contained elsewhere in the work of Baudrillard. But I cannot detect anything terribly impressive in the brief quote presented above.

P.S. Notice that the above quotation, unpancked, turns out to be what Daniel Dennett calls a deepity: a deepity has (at least) two meanings; one that is true but trivial, and another that sounds profound, but is essentially false or meaningless and would be “earth-shattering” if true.