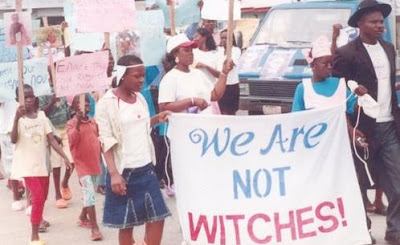 New York, NY December 4, 2009—The Center for Inquiry (CFI), an international organization that fights for science and reason, launched an anti-superstition campaign in May 2009 to highlight and combat the abuse of alleged child witches throughout the African continent. Now witch hunter Helen Ukpabio, head of the Liberty Gospel Church in Nigeria and a frequent target of criticism by CFI, has filed a lawsuit in Nigerian federal court against Leo Igwe, CFI’s representative in Nigeria.

A mob of about 150 members from Ukpabio’s Liberty Gospel Church attacked Igwe and others during a “Child Rights and Witchcraft” event in Calabar, Nigeria on July 29, 2009. At the end of the frightening event, Igwe found his eyeglasses smashed and his bag, phone, camera and a copy of his planned speech stolen. Police finally broke the mob up and arrested one person.

The complaint filed by Ukpabio essentially alleges religious discrimination on the part of Igwe, who has been a tireless, vocal critic of Ukpabio’s claim that many of Nigeria’s children and women are witches. “Ukpabio has repeatedly targeted and persecuted the most vulnerable members of society. She is the one who should face justice and answer for her crimes,” said Igwe. “She should be ready to pay damages to the thousands of children who have been tortured, traumatized, abused and abandoned as a result of her misguided ministry.” Igwe said that many homes and households across Nigeria have been damaged by Ukpabio’s witchcraft schemes and other questionable activities.

The suit, scheduled for a hearing on Dec.17, is seeking an injunction preventing Igwe and other humanist groups from holding seminars or workshops aimed at raising consciousness about the dangers associated with the religious belief in witchcraft. The suit aims to erect a legal barrier against rationalist or humanist groups who might criticize, denounce or otherwise interfere with their practice of Christianity and their “deliverance” of people supposedly suffering from possession of an “evil or witchcraft spirit.” The suit also seeks to prevent law enforcement from arresting or detaining any member of the Liberty Gospel Church for performing or engaging in what they say are constitutionally protected religious activities. These activities include the burning of three children, ages 3 through 6, with fire and hot water, as reported by James Ibor of the Basic Rights Counsel in Nigeria on August 24, 2009. The parents believed their children were witches.

Along with the full support of the Center for Inquiry, Igwe has been offered legal representation from Stepping Stones, a charity registered in the UK dedicated to defending alleged witches, primarily in the Niger Delta region of Nigeria.

CFI’s anti-superstition campaign is continuing strong. The campaign began May 29 of this year with a groundbreaking seminar titled “Witchcraft and its Impact on Development” in Ghana. Campaign organizers say that they hope to educate the public about the dangers of superstitious beliefs while highlighting the abuse of children and exposing the “false prophets” who spread dangerous misinformation.

“The persecution of alleged child witches underscores the importance of our anti-superstition campaign in Africa,” said Norm R. Allen Jr., executive director of African Americans for Humanism and CFI’s Transnational Programs. “Superstition has dire consequences to individuals and societies, and often contributes greatly to gross human rights abuses. Those who continue to view superstition as benign must think again.”

Allen says that plans are underway to lead marches aimed at combating superstition and to work with governments, NGOs, traditional rulers, and women and childrens’ groups to promote rationality and universal human rights.

Igwe remains optimistic and full of resolve. “I am convinced that at the end of the day, reason, justice and human rights will prevail,” he said.