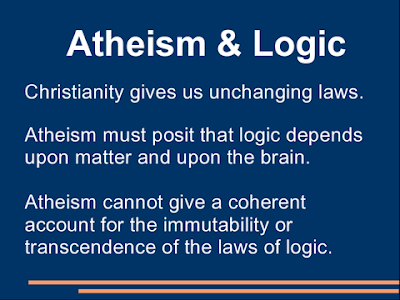 Just discovered this talk, with accompanying slides, which pushes the same atheism-bashing argument – atheists cannot allow for or justify logic and reason.

The website is here. From there you can download the talk (mp3) and also the accompanying slides (example to the right).

The author, David Anderson, is a creationist, and has a blog here.

On which I also found this sort of argument:

The goal of those who want to live their life without God is to find some justification for doing so. In general, they put their hopes in science. They hope that they will be able to reduce all of human life and experience ultimately to biology, reduce that biology to chemistry and then reduce that chemistry to physics. In other words, they hope to explain everything as the inevitable outworking of impersonal laws. Nothing transcendent or greater than the universe will be required to explain anything happening in the universe. Well, apart from the tricky question of the origin of the universe itself, for which as I pointed out atheologian Richard Dawkins gave us the amusing but ultimately tragic answer “we’re working on that”.

Supposing that this reduction could be carried out though, using as yet unfound explanations, what does that leave us with?