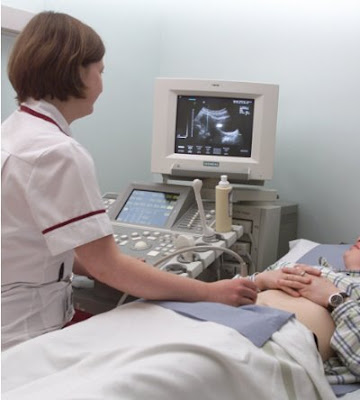 Following on from the telescope analogy – here’s a further couple of points.

First, some will say (have said, in fact) that the faculty by which we experience the divine is not perfectly transparent, but hazy and misty. That is why there is so much disagreement between believers (be they ancient Norse, or ancient Greeks, or ancient Mayans, or modern day Buddhists, or whatever) about what is experienced.

2. The appeal to “training” and “experts”

Second, just like the use of, say, sonic imaging equipment, or a primitive telescope, such as Galileo’s, perceivers need to be trained. Acquiring the ability to discern a baby in the swirling, milky images produced by a scanner requires years of practice. Without this practice, causal observers may “see” all sorts of things that are not there.

So why not trained, expert God-sensors?

My response to the “fuzzy image” move

Well, yes, this would explain at least some of the disagreement between observers. But it doesn’t make it reasonable to trust in the deliverances of this supposed “faculty” by which God is allegedly perceived.

Note, first of all, that this sort of appeal to the misty, hazy nature of the faculty – it’s very much “through a glass darkly” – in order to explain inaccuracy and error is a standard move of psychics and other deluded folk to explain their mistakes. Here’s Tony Youens, psychic debunker, on psychics:

An advantage here is that no one expects the reader, whatever the method, to be able to come up with laser-like precision. Communication with the dead is, after all, not like using a telephone. For example, the psychic may fondle your watch (psychometry) and attempt to tune in to its vibrations. It’s not easy, so they begin cautiously, ‘I’m getting something about a man… called Michael…. “Mick”, or is it “Mike”? I feel a kindly presence… very caring… could be difficult at times but generally has his heart in the right place.’

Of course, when they get it wrong, psychics regularly appeal to the hazy nature of the medium with which they are working to explain their error.

When made by psychics, I don’t find, even for a minute, these sorts of moves and evasions remotely convincing. Nor do I when they are made by other supernaturalists – i.e. the religious.

Why not? Well, in the case of psychics, we lack any solid, corroborating evidence for what they claim to experience. Plus there’s a great deal of evidence that the sincere psychics are at least very often falling victim to classic fallacies, psychological factors, etc. Which immediately puts all their testimony in serious doubt.

My response to the “training” move

What about “training” and “experts”? Just like ultra-sound scanner operators, can’t religious folk be trained to use their God-sensing faculty, so they become much more reliable, trustworthy witnesses?

Here’s a problem for the “training” suggestion. In order to acquire a skill, you need to be able to practise, and test yourself against some independent standard of success. To borrow an example from philosopher David Pears (who uses it in a discussion of the private language argument), to become a good marksman, you need to be able to go and check the target to see how well you did. If the target vanishes the minute you pull the trigger, you can’t tell how you are doing, and so can never get any better. You’ll never acquire any skill.

Those trained to use sonic scanners, etc. can acquire their skills because there is something available against which they can test how they’re doing. If they say “It’s twins!” and only one baby shows up, then they know they got it wrong.

So now how does the religious person “practise” and acquire the “skill” of using their God-sensing faculty? How do they test how well they are doing? There’s nothing independent against which they can check. So they cannot acquire any skill. When it comes to religious experience, the “skill” of the “expert” practitioner is, frankly, a fiction.

To this, you may respond: but the religious can check what they experience against something independent, e.g. the Bible, and the testimony of others.

(i) they are then only justified in trusting their religious experience because it’s confirmed “independently”, which is what Plantinga, and several contributors to this blog, deny.

(ii) actually, it isn’t being independently confirmed, is it? The Bible does not provide independent confirmation of religious experiences (we can argue over this if you like).

(iii) the other so called “experts” are no such thing. Real experts have a demonstrable skill that can be independently checked. When it comes to religious experience, the so-called “expert” witnesses are unable to demonstrate any such skill – not even to themselves. Indeed, for the reasons just discussed, they can’t be said to have acquired any skill.

I guess the point I am making here is really a conceptual one. It doesn’t make sense to describe someone as “acquiring a skill” if there’s no check available to them by which they can measure their progress. The concepts of skill, training, practise and expertise are essentially linked to that of being able to check against something independent.

Interestingly, I think we can make an conceptual distinction here between skills and abilities. An ability you are born with is not a skill, because it is not something you acquire through practise, or can further hone through practise.

I acknowledge the possibility that someone might be born with an ability to perceive God. But that’s not a case of acquiring a skill. That person’s ability might then improve if they exercise it in a particular way, but, if there’s no way for them to tell how well they are doing, depending on how they do it, this wouldn’t be “training”, nor “an increase in expertise”. It would just be luck.

Of course, someone might be under the illusion that they are exercising a skill, practising it, and so on. Wittgenstein somewhere describes someone (perhaps a lunatic) using a pair of compasses very deliberately, and seemingly with great precision. They think they are “measuring”, or whatever, and with some skill, but the truth is they are deluded. For there’s no standard against which they can be judged to be doing it (whatever “it” is) well or badly.

This does seem to be a correct conceptual point: that, in the absence of such an independent standard, we cannot be described as “practising”, “exercising a skill”, etc.