Posted by Stephen Law on Nov 20, 2007 in Outrageous Tales From The Old Testament | 15 comments

Outrageous Tales From The Old Testament 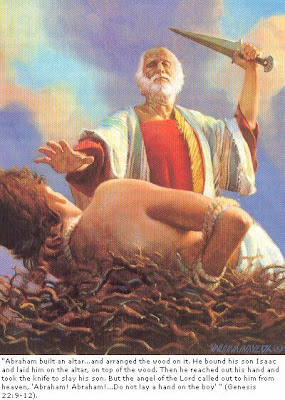 Below I mentioned that the Old Testament God seems something of a monster (genocidal, petty, vindictive, fickle, vicious, performs weird loyalty tests on Job, Abraham, etc.) Indeed, here’s that quote from Waugh again about Randolph Churchill’s shock on actually reading the Old Testament:

Randolph Churchill, son of Winston, had been annoying his friends by talking too much. They wagered he could not keep quiet for a week. Churchill, a keen gambler, thought he could win the bet by reading the Bible. But he didn’t last long. After a few pages, he was heard to exclaim, “God! God’s a shit!”

In response to this and comments, Guess Who says:

As someone who actually reads Hebrew and has published exegetical articles on the Hebrew Scriptures, I would just like to say that I find that Christian fundamentalists and secular fundamentalists read the bible in the same way. How do they read it? Entirely without sophistication, unable to appreciate irony, humor, metaphor, or purposeful moral ambiguity. They leave everything they may have ever learned about literature behind them. If people read Shakespeare the way Skeptic’s Annotated Bible reads scripture, they would say “Cassius was an imbecile – he thought that Caesar was some kind of huge monster-giant as big as Godzilla” after all, he did say that Caesar “doth bestride the world like a Colossus”!

Let’s discuss. Obviously, we should be sensitive to metaphor, irony, etc.